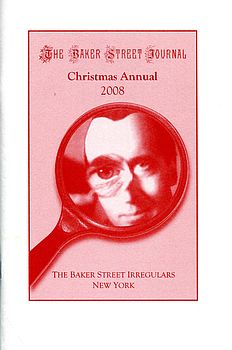 Reading the Signs:
Some Observations and Aperçus on Film and Television Adaptations of The Sign of the Four.

Bringing to motion picture and television screens a simple story of past misdeeds, greed, and revenge like The Sign of the Four should be easy. But it isn’t. Because audiences have traditionally sought the very romance that Holmes complains about in Watson’s writings, filmmakers and television writers have tended to steer clear of the Victorian cesspool that is Holmes’s mind in The Sign of the Four, instead transforming the young, drug-injecting sage of Baker Street into a benign, if slightly eccentric, “Uncle Sherlock.”

This Christmas Annual, written by film expert, irredeemable Sherlockaholic, and master of the raised eyebrow David F. Morrill (“Count Von Kramm”), illustrates the many ways The Sign of the Four has defied straight adaptation over the decades. Each chapter deals with a particular film or television version of Conan Doyle’s story, discussing portrayals of Sherlock Holmes that range far afield from the novel’s saturnine 20-something, drug-abusing genius. The reader is introduced to Holmeses of varying ages and canonicity, new characters, Tobys of varying breeds, and, most often, a Watson unlucky in love, a faithful companion more in need of a cold shower than a marriage license. It’s an entertainment that is like the adaptations themselves—fast-paced, amusing, and (nearly) drug-free!

The full 2008 Christmas Annual is also part of the eBSJ PDF archive.

International Orders for the 2008 Christmas Annual

(or visit our mail order page)

Table of Contents for the 2008 Christmas Annual

Introduction: The Romance Was There

“Quite a family party”: The Sign of Four: Sherlock Holmes’ Greatest Case (1932)

“Women are never entirely to be trusted”: The Crucifer of Blood (1991)

“A fitting windup to an extremely interesting case”: Final Thoughts and Whodunit

For all Christmas Annuals through 2011, get the eBSJ PDF Archive.

Printed copies for a few other years are still available.

Don’t miss any of the new issues. Subscribe to the BSJ today!

Referring to My Notes