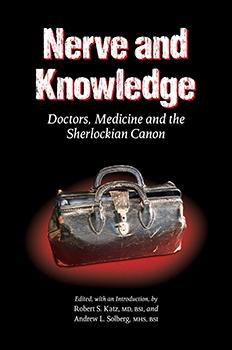 Nerve and Knowledge:
Doctors, Medicine and the Sherlockian Canon.

“When a doctor does go wrong he is the first of criminals. He has nerve and he has knowledge.”
—Sherlock Holmes in “The Speckled Band”

Medical issues and motifs heavily influence the Holmes stories. Arthur Conan Doyle began his career as a physician, and only later turned exclusively to writing. Holmes’ character is modeled after Dr. Joseph Bell, a famous diagnostician and teacher of Conan Doyle. And the stories are narrated by Dr. John Watson, an invalided army surgeon and sometime general practitioner.

The nineteen essays in this volume provide an in-depth analysis of all aspects of medicine in the Sherlock Holmes stories. The book takes us from the education of Conan Doyle and Watson, to the ailments that Holmes and Watson might have themselves suffered, to diagnoses that affected characters in the stories, and to public health and science in Holmes’ and Watson’ era. A distinguished roster of physicians, scientists, and Canonical experts has been assembled as contributors to this comprehensive volume.

Table of Contents for Nerve and Knowledge

Here is a Gentleman of a Medical Type: Arthur Conan Doyle at Edinburgh
by Daniel Stashower

Why Bart’s? A Case in Geographical Social History
by Jeffrey Kaplan, MBBS and Peter Kaplan, FRCP

Making Bricks without Clay: The Medical Training of Dr. Watson
by Catherine Cooke

Dressers to Professors: A Spectrum of Canonical Doctors
by Marilynne McKay, MD

A Physician Calls at Baker Street: Holmes and Watson as Patients
by Richard Sveum, MD

Forensic Toxicology in and around the Canon: or Sherlock Holmes – His Further Limits
by Marina Stajić, PhD

On Seven Percent Solutions and Medicinal Brandy: Pharmacology in the Canon
by Christopher Zordan, PhD

The Canon on the Couch
by Donald K. Pollock, MD, PhD

I Should Value Your Opinion About the Mitral: Cardiology and Sherlock Holmes
by Franklin B. Saksena, MD

When a Doctor Goes Wrong: Medical Malpractice in the Canon
by Clifford Goldfarb. LLM, and Hartley Nathan, QC, LLM

The Excessively Expressive Corpse and the Canon
by E.J. Wagner

Do No Harm: Medical Ethics in the Canon
by Howard Brody, MD, PhD

The Doctor Is “In”: Contributors

Audio Interview with the editors (podcast at I Hear of Sherlock)

The Baker Street Irregulars, the literary society focused on Sherlock Holmes, publishes The Professions Series to examine the roles played by various professions in the Sherlockian Canon.