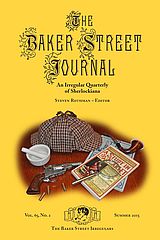 Irregular Children: On Coming of Age in a Sherlockian Home
by Sonia Fetherston.

The Game Is Footer
by Mark Alberstadt.

The “Masculine Novel”: Discussing the Female Position in the Canon.
by Victoria Rood

Was Holmes a Spiritualist?: The Evidence of Jefferson Hope.
by Nick Dunn-Meynell

The Case of the Bare-faced Literary Theft: Adrian Conan Doyle and the Danish Editions of the Second World War
by Palle Schantz Lauridsen.

The Baskerville Succession
by Malcolm Noble.

The French Artist
by Basil Chap.

The Return of Sherlock Holmes: In San Francisco with William Gillette.
by Timothy S. Greer

This is the best of times to be a Sherlockian; we live in a Golden Age. Lower your eyebrows, and wipe those quizzical expressions from your doubting faces. Stop and consider the facts.

Sherlock Holmes is—as every issue of the Journal confirms—everywhere. He is in the movies, on television, in bookstores, making headlines in newspapers—omnipresent in all the “old media” in which he has appeared for many years. But Baker Street has also captured the Internet. A Google search for “Sherlock Holmes” produces over 41 million results. Among those hits are thousands of blogs devoted to Holmes. There are also thousands of people on Twitter every day broadcasting 140 characters of Holmesian interest, and endless Facebook pages devoted to Holmes and Sherlockian doings. Besides these manifestations of Holmes in the wider popular culture, Sherlockian scholarship and publishing flourish with new and wonderful projects.

Holmes, very much a 19th-century man, has captivated our time and proven himself a neat fit into what one might suppose to be a less gentle era. Part of Holmes’s appeal may be the gas-lit age in which he was launched, but equally enduring is the man who will always be cleverer than those around him and who uses his skills to do good (by his lights).

Being Sherlockian allows us to embrace the new—as Holmes did. Yet we don’t spurn the past. Rather, we use our knowledge of it to enhance our pleasure in the present and in holding fast to our belief that Sherlock lives.