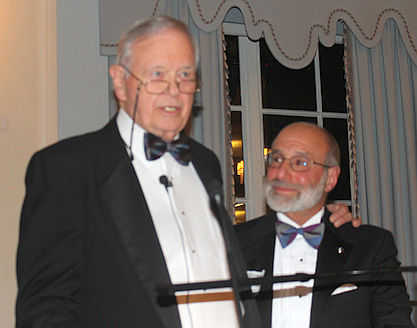 Celebrating the 165th birthday of Sherlock Holmes, the 2019 BSI Weekend took place in New York City with events from January 9-13, including the BSI Dinner on Friday January 11.

Of special note was Mike Whelan’s announcement that Michael Kean would be the next leader of the Baker Street Irregulars. He will officially become the new “Wiggins” at the end of the January 2020 BSI Dinner.

For the BSI Dinner group photo, a list of attendees, and other details, see the BSI Trust page for the 2019 BSI Dinner.

And below is a photo of the ten Sherlockians receiving their Investiture certificates at the 2019 BSI Dinner. This includes nine people newly invested in the BSI along with a replacement investiture certificate for Ronald S. White (“The Cabinet Photograph”), whose home was destroyed in the Paradise, California wildfire.