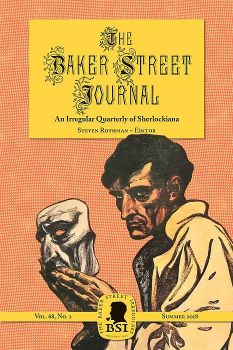 Cricketing and Conan Doyle: The Perfect Pitch
by Mark Alberstat.

Take a Walk on the Wilde Side
by Michael J. Quigley.

How Leprosy Entered the Canon
by Richard M. Caplan.

“It Is Infallibly Deadly”
by Edward D. Chan and William S. Dorn.

The Importance of Titles and Names
by Nick Dunn-Meynell.

“Arise, Sir Sherlock”: But Why Not?
by Nicholas Utechin.

“It’s all been done before”: Plot Tropes in the Canon
by Dan Andriacco.

“We’ve got to think about the game”
by Steven Rothman, Editor

Ponder some of the ways we have observed Sherlockians playing with screen iterations of Holmes and Watson. There has been research to discover every item used or worn by the actors appearing in Sherlock. There have been meditations on the ideal actors to play Holmes and Watson, ignoring chronological or metaphysical challenges. There have been mash-ups of a variety of films and soundtracks to enliven Holmes on the screen.

The Internet permits a plethora of Sherlockian adventures for a wide variety of Holmeses and Watsons, often done on a shoestring but available to a global audience of appreciative viewers on YouTube. Self-publishing allows a never-ending parade of pastiches, fan fiction, and scholarly work. There have been more depictions serious, frivolous, and even (my blushes!) pornographic of Holmesian sexuality.

So the Game changes and the Game remains the same. The rules are modified by each generation. The kids who saw Sherlock in Spock are being followed by those who see him in SpongeBob. And they are both right. All Sherlocks are real Sherlocks. Think about the Game, appreciate how it has always been played, and seek out new ways to play it and new people to play it with.

Referring to My Notes