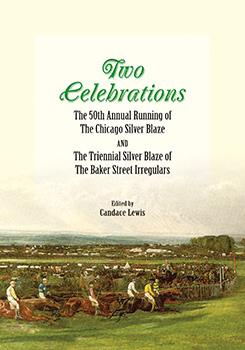 Two Celebrations:
The 50th Annual Running of
The Chicago Silver Blaze and
The Triennial Silver Blaze of The Baker Street Irregulars.

Edited and Introduced by Candace Lewis.

The subjects of this book, sponsored by the Baker Street Irregulars to commemorate the October 2009 gathering in Chicago, are equally fitting: an exploration of racing and how pictorial art of the nineteenth century depicted the racing scene of the Silver Blaze era by art historian Candace Lewis, a rigorous analysis of the logic of the story by writer and editor Roger Donway, and a warm reminiscence of New York Silver Blaze races by retired professor Art Levine, BSI.

Other BSI Event and Expedition books

The Haven Horror (“The Retired Colourman”)