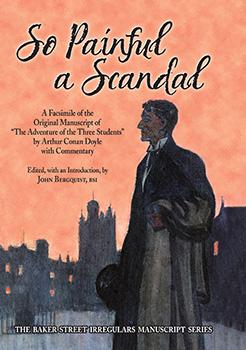 So Painful a Scandal.
A Facsimile of the Original Manuscript of
“The Three Students” by Sir Arthur Conan Doyle
along with Commentary on the Story.

So Painful a Scandal is the sixth title of the multi-volume Baker Street Irregulars Manuscript Series. Although “The Adventure of the Three Students” is not among the most popular of Arthur Conan Doyle’s Sherlock Holmes stories, it has nevertheless attracted much critical debate over the years and thus is worthy of the close examination this volume provides. Published by The Baker Street Irregulars with the cooperation of Harvard College’s Houghton Library, this volume presents a facsimile of the original manuscript of “The Three Students” along with a thoroughly annotated typescript and commentary.

Edited and introduced by John Bergquist, the volume includes Phillip Bergem’s notes on the manuscript and Randall Stock’s story of the path it has taken to its present home at the Houghton Library. Also included are Michael Eckman’s report on the land of “The Three Students,” Nicholas Utechin’s demolition of the story’s premises, Guy Marriott’s arguments supporting Cambridge as the site of the tale – balanced by Oliver Nicholson’s rejoinder in favor of Oxford, and Andrew Malec’s piece on the story’s American illustrator, Frederic Dorr Steele.

This volume was published in conjunction with the May 2009 Harvard symposium “Sir Arthur Conan Doyle: A Sesquicentennial Assessment.”

So Painful a Scandal

Table of Contents for So Painful a Scandal

Notes on the Manuscript
by Phillip Bergem

Touring with “The Three Students”
by Michael Eckman

“The Three Students” at Cambridge
by Guy Marriott, BSI

Oxbridge Camouflaged or Camford Obscured: Some Subfuscations of the Doylean Redactor
by Oliver Nicholson

A signed, limited-edition version of So Painful a Scandal is part of the BSI’s Harvard Trilogy Boxed Set.

Index to So Painful a Scandal (PDF)

The Baker Street Irregulars, the literary society focused on Sherlock Holmes, in cooperation with leading libraries and private collectors, publishes The Manuscript Series to bring to the public facsimile editions of manuscripts and other documents relating to Sherlock Holmes and Sir Arthur Conan Doyle, with insightful commentary by talented Sherlockian and Doylean writers.